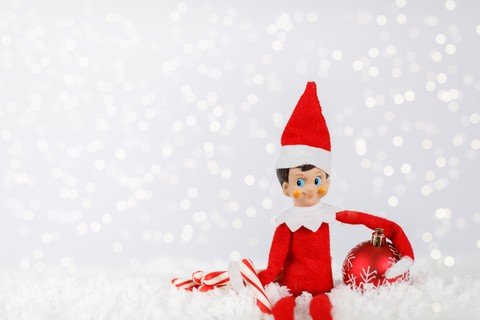 It’s midnight and I wake with a start. I’ve forgotten something. I go through each kids’ name in my head. No…they are all in bed.  Have I left the dinner leftovers out? No. But I know there is something I’m forgetting.  And then I remember. Alex the elf. I let out a groan of despair.

My husband stirs. “What?”

“The elf. Alex! The freaking elf.”

The elf started out as a fun, magical tradition with the first child. He arrived after Thanksgiving, and I imagined the fun I would have surprising my son each day. That fun got old around late November. And we’ve had two kids since then.   A friend new to parenting suggested having the elf arrive as late as possible in the season. “That way,” she pointed out, “You’ll have less nights to have to move him around.”  It was good advice, and this year there was nary a mention of the elf until the youngest asked when OUR elf was going to arrive.

“Coleman’s elf is already HERE,” he announced. “And Mya’s elf WRECKED her KITCHEN!” he is gleeful.  It is true. I’ve seen all of his friends’ elves prancing around Facebook, ziplining across the living room, bringing treats and presents, writing their name in powdered sugar that spreads all over the floor.

So, Alex, the damn elf came back without any pomp and circumstance, but he still needs to move, and here we are.

Then my husband says, “I notice that Alex is becoming less creative in his movements as he ages.”

As he ponders this, he realizes I am correct, and elf moving is not a chore he wants to add to his roster.

I am horrified, but also intrigued.

“Don’t make me say it out LOUD,” he hisses. “You know…an ACCIDENT.”

But it has been said, and now it is out there. The idea grows, ripe with possibilities.

“Maybe he could get flushed down the toilet,” my husband offers.

“Good idea in THEORY, but how will the kids know he’s gone?” I ask.

“He could leave a note….oh wait….then it wouldn’t be an accident. A note from the KILLER maybe…oh no, too dark. Maybe his hat could just be in the toilet. You know, like floating there,” he wiggles his fingers.

“Just floating there?” I imagine the kids rushing downstairs looking for Alex and seeing his tiny red hat floating in the toilet. “No. That’s too terrible, and then they might be scared to swim.”

There is a long stretch of silence–each of us lost in the fantastic reality of having no elf to move for the next three weeks. I look at the clock. It is 1:00 am. We’ve been plotting the demise of Alex for an hour.  “We could have moved him sixty times with the time we’ve spent thinking of ways to kill him,” I mention. “AND there’s a good chance our kids would need intense therapy after they find out Alex has been murdered.”
“There’s a good chance they’ll need it anyway,” my husband says eyeing me warily. I notice he’s moved his pillow to the far end of the bed.

So I end up getting out of bed. I move the elf, and I write a little note to the youngest. “Thank you for believing in the magic of Christmas.”

I know that would have been a perfect ending to this story, but after more thought, I decided I didn’t want the elf to be literate, and open up that potential can of worms for the future. I am a more seasoned parent now, and I learn from past mistakes. The fact that Alex survives and lives to see another Christmas is the true miracle here.